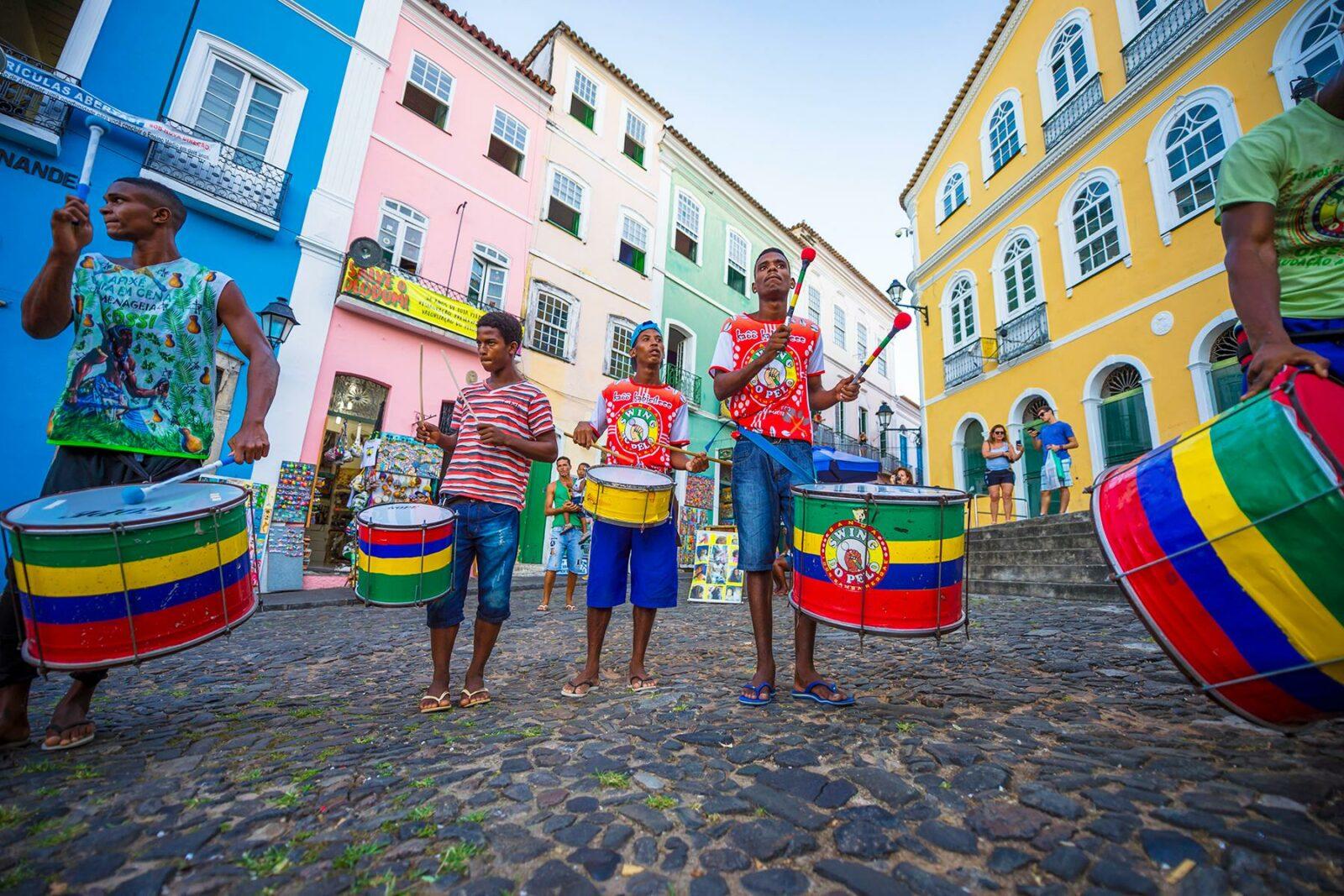 Salvador is now among the largest cities of Brazil, the capital of the state of Bahia, but it was the first slave market in the “New World,” which is why the Afro-Brazilian population in this city is highest in all of Brazil. Though the city has a somber past, with time, its inhabitants have claimed their space and renewed their traditions.

Check out 13 reasons why you should visit Salvador de Bahia.

The culture of live music is very strong in Salvador, and you can easily get a taste this city creates at several venues such as the laid back and popular Commons Studio Bar or the restaurant-bar Psyco, which hosts live music often. Samba, reggae, mixes of these genres, jazz, rock and many other genres of music can be experienced. It is believed that samba reggae is a product of Salvador, along with several experimental genres. A visit to any music shop reveals the use of a dizzying amount of percussion instruments and several unique instruments.

Salvador will not disappoint your taste buds, particularly for those who are open to experimentation. Seafood is widely consumed here, and ingredients such as palm oil and coconut milk lend a unique taste to dishes. There are restaurants of a range of budgets available.

Vegetarian and health conscious eaters would be happy to know that there are vegetarian and vegan only restaurants serving variants of such dishes, such as Rango Vegan and B-Vegan Gastronomia Vegetariana. Street food is also big in Salvador, particularly vendors who carry sweets of various kinds, such as the coconut flavored Cocada and the condensed milk based Qeijadinha.

INSIDER TIP
If you want to get a taste of some incredibly done Mocqueca, a garlic and tomato based traditional fish stew, head to Bar Zulu.

3 OF 13
Discover the Museums

Like most historic cities across the world, Salvador is home to several interesting museums that are of appeal to the curious history buffs and art lovers. Besides being an interesting way to learn about the history and culture of both Salvador and the state of Bahia, some of Salvador’s museums give an insight into Brazilian culture in general. Misericordia Museum is one such place to learn about the history of the city, while the Bahia Museum of Modern Art provides an insight into the modern artists from Brazil.

One of Brazil’s most important literary figure, Jorge Amado, who lived in the city once, has an informative and beautiful museum dedicated to his name as well–the Fundação Casa de Jorge Amado. One interesting thing about Salvador’s museums is that many are inside churches, such as the Museum of Sacred Art, which has an impressive collection of religious art.

4 OF 13
Check out the Architecture in Pelourinho

The old town, called the Pelourinho district, is a UNESCO Heritage site that was once the residential, civil, and military hub of the Portuguese colonizers. The architecture reflects the style from 17th to 19th centuries in its mosques, baroque palaces, and large squares. At one time, the district also served as a site of punishment for slaves. However, it is now largely a commercial and monumental center with colorful, charming streets bursting with life. It stands testament to the amazing architecture that Salvador is home to. And while it’s touristy, one should not miss the area for the churches and the stunning buildings here, some of which are the oldest in all of Brazil. The Ingerja e Convento Sao Francisco, considered among the most beautiful churches in Brazil, is a must-see. The gold-laden Catedral Basílica is another recommended church. Praça de Sé is a spot where one can hang out for a while, with artists and musicians frequently performing there.

INSIDER TIP
Go for a guided walking tour to discover some hidden parts of the Old Town, as well as to learn about the significance of buildings you might otherwise overlook.

5 OF 13
Get Into Football Mania

The iconic and historic Fonte Nova Arena was rebuilt for the 2014 FIFA World Cup. The atmosphere of cheering (and booing) crowds is unparalleled. It is possible to watch a match there, with tickets easily available online as well as at the ticket booth at the stadium. If it is a national match and EC Bahia (the local team) is playing, be sure to be on their side!

Capoeira is a martial art that was created by slaves of an Afro-Brazilian origin in the 16th century and incorporates dance, music, and acrobatics. Accompanied by background music played on several instruments, it makes for a riveting performance. Standing in a circle around the performers, spectators cheer as the two people involved in the match sway and fight in rhythm. The music accompanying Capoeira typically has berimbau, a one string string instrument following the pace of the fighters, with vocals using words as a form of response of the fight. Capoeira’s large presence in Salvador makes it the perfect place to witness or learn a few moves yourself.

INSIDER TIP
Walk around the Pelourinho district and you will almost certainly find street performers doing Capoeira–be sure to tip them, however.

7 OF 13
Learn About Afro- Brazilian Culture

Much of what one enjoys in the city–Capoeira, pan-African cuisine, or religious practices–have come from a rather grim past. Salvador’s role in playing home and transit to slaves made it a place where a considerably large amount of slaves mixed with the Bahian population of the city at the time. The city is not only the largest home to the Afro-Brazilian culture, it is also a great place to learn about it.

Various African cultures that have mixed with the Bahian culture of Brazil come alive in Salvador through food, music, and the arts. To learn about the city’s cuisine, head to the Museum of Gastronomy of Bahia. Caixa Cultural is a venue where you can access documents, attend workshops, and witness cultural performances. Arena SESC SENAC- Pelhourino Theater is another place to learn about the music and arts of the Afro-Brazillian culture that inhabits the city.

INSIDER TIP
Head to the Afro-Brazilian Museum get a sense of perspective on the history of slavery in Brazil as well as the rich heritage of the several African cultures that survive today.

Salvador is a hilly city that can be interesting to look at from a bird’s eye view or simply via a bus ride that takes you from the main bus depot to the historical center. The city is particularly photogenic from certain vantage points, such as the famed Salvador elevator or Elevador Lacerda.

The elevator leads you to the old town from the Mercado Modelo, a large market where one can find several shops and restaurants with curious and potential souvenirs. It is also a space to get a perspective on the beauty the hills of the city lend to the city, with the ocean close by and a large, vast harbor.

INSIDER TIP
Head to the Christ Hill to get a view of the Barra beaches from the top, especially during sunset.

9 OF 13
Relax at Clean City Beaches

Salvador has a large coast and the city beach that people prefer going to is in the Barra area, such as the Praia Porto da Barra. There are several nearby beaches that can be visited for day trips, but the city beach in Salvador is unbelievably clean–a perfect place for a jog, stroll, or a leisurely nap.

The beach tends to get crowded but finding spots around the Santo Antônio da Barra Fort and lighthouse is possible. The crystal clear waters will stun you!

INSIDER TIP
Keep a lookout for spots from where you can climb down to the water from the rocks.

Salvador was originally named São Salvador da Bahia de Todos os Santos, or Holy Savior of the Bay of All Saints, and was colonized in 1549 by the Portuguese. It was the first capital city of Brazil, as well as the first port through which slaves were transported to the Americas.

The city has, thus, been witness to a lot of significant milestones in the region and the continent and can be a treasure trove for those looking to get a slice of history. Abelardo Rodrigues Museum is a recommended place to learn about both the indigenous history and Christian influence in Brazil through its crafts and art collection. Brazillian Historic and Geographic Institute is also another amusing place to learn about the history of Brazil through objects and portraits.

As a popular tourist destination, Salvador has opened up a number of cafés that are worth a visit. On a visit to Brazil, it is also important to take part in the coffee culture of the country–after all, it is some of the best coffee in the world.

While walking through the historic center or moving around the city, a traveler will find several cafés that are also bookshops, such as Boto-Cor-de-Rosa Livros Arte & Café, art galleries like the Ferrao Mansion House, or even someone’s house to take a break and sip a cuppa.

12 OF 13
Indulge in Street Parties

Salvador is one of Brazil’s most popular and largest cities for Carnival celebrations, which take place over a week in February each year typically. The streets come alive not only during this time but months in advance, as practice performances and block parties begin.

However, Salvador’s street parties are not limited to the time in and around Carnival season. The Bahian capital hosts samba parties on streets regularly, particularly on Tuesday late evenings.

INSIDER TIP
Find out from locals and the accommodations staff the timings and dates for street parties–they are hardly announced well in advance.

Salvador is home to a vibrant nightlife. Rio Vermelho is the area where most of the city’s nightlife can be found. A popular area for locals, the streets of this area by the sea are teeming with young people drinking beer and debating which club or pub to head to. The buzzing plaza, known as Largo de Santana, is the first place locals typically sit down in until the clock turns to midnight, after which they head to the serpentine lines outside clubs, such as LGBTQ friendly San Sebastian or the tire shop converted into club, Borracharia.